First Impressions of ANTARCTICA! (our 7th continent) - Travelvl - Free video for you 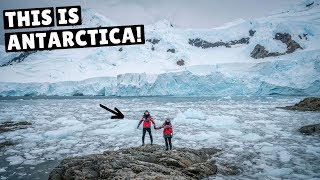