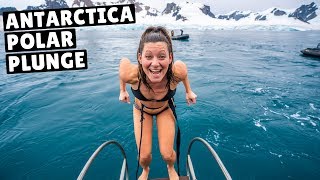 HOW and WHEN to Visit ANTARCTICA - The 7th Continent... Beyond The Horizon