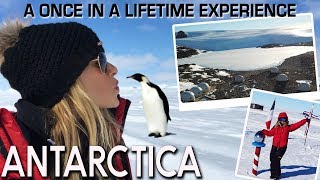 Antarctica on the amazing Ocean Nova with Eclipse Travel (2 min)